Last night, I dreamed of heaven

And I beheld, and I heard the voice of many angels
‘Round about the throne, and the beasts, and the elders
And the number of them was ten thousand times ten thousand
and thousands of thousands, saying with a loud voice:

Blessing, and honour, and glory, and power
Be unto Him who sitteth upon the throne
And unto the Lamb forever and ever
Worthy is the lamb that was slain.

Heaven was a perfectly cubical building, about 1,400 miles across. Outside – there was no outside. All other existence had been done away with. Creation had served its purpose. Long, long ago (I will not say that it had been millions, or billions, of years – time has little meaning here), God had rolled up the heavens and the earth like a scroll, and all that remained of reality was this pocket.

The whole of the inside of this vast building, about the size of Brazil, was a ziggurat, one vast set of steps, on which people stood to offer their praises to God, while angels flew above, criss-crossing the space.

Holy, holy, holy
God of power and might
Heaven and earth are filled with your glory

Hosanna, hosanna! In the highest!

The had all sung this song ten thousand, or ten million times before – been through the entire Hillsong back-catalogue and every other song of praise ever written ever, over and over. Yet they had only just begun to sing praises to God. They were going to be doing this forever. Exactly this. In this building. Forever.

At the peak of the ziggurat sat God on a throne. A handsome middle-easterner in the prime of his years, with a neat little beard, wearing a rich red and gold robe with a turban. He smiled and tapped along to the rhythm of the song, as the redeemed of earth offered their endless, deeply felt, utterly sincere flatteries. Thinking to himself:

“It was all worth it.

“I did it all for this, for this, and it was all so totally worth it. The religious wars, the persecutions, the racks, the burnings, the diseases, the worms that infected people’s eyes, the little children dying of hunger. I had to throw fifty billion souls into hell just to have these two and a half, but it was worth it. An endless age I existed all alone, just the three of Me, until I struck upon the idea of creation. All I ever wanted was for some things that I made to tell me just how great I am, and now here they are doing it. This – this is so awesome!”

The thought struck him, as it always did (being unchanging, he never learned anything).

A flicker of flame caught his eye. The whole of the floor of heaven, the whole ziggurat, was made of glass mingled with fire. Within it, the shades of the damned writhed and wailed in endless torment.

“Look at her!”, God thought to himself. “Stephanie Frumm. She didn’t think I was worthy, she went her whole life without telling me once just how great I am. Well, sucks to be you, Steph. Sucks to be you. All I ever wanted was for you to obey me, and I would have settled for an admission that you ought to obey me, and a weekly apology for not doing it. But no, no, Steph was just too good for that, to good to submit herself to the will of Me. Well fuck you Steph, because now you’re burning, and you’re going to stay burning forever!”

Over on tier thirteen thousand seven, Stephanie’s mother – Enid – stood worshipping. Wearing a white robe, shining like a star in the reflected glory of God, she sang:

As the deer pants for the water, so my soul longs after you.
You O Lord are my heart’s desire and I love to worship you.
You alone are my strength, my shield
To you alone does my spirit … yield

“See that, Steph? You mother knows what’s what. You could have been out there right now if you’d just asked me to forgive you. She was faithful, faithful to the end. And now she has her reward. Well done Enid. I love you too!”

Around the throne of god the four cherubim flew, mightiest beings in all creation. With their six wings, they hid their faces, bodies, and feet, and the called in a loud voice “Holy, holy, holy is he who sits on the throne!” Non-stop. God never got tired of it, never grew bored or weary of it, never thought to himself “Ok, guys, I get it now”. Everything he had ever done, he had done for this, this single, endless moment.

Stephanie’s mother, Enid, had forgotten all about her daughter, about everything she had ever cared about in life. All tears had been wiped away from her eyes, all grieving and sadness and regret, all fear. All she knew was the endless love of God. She wore a gold crown set with precious gems just like everybody else, and a silver cord went from her navel to the small white pillar she stood next to, a white stone with a name on it that only she knew. Her eyes were blind, her sight burned away from looking on the glory of God, and her voice was hoarse from shouting his praises. She wept tears of joy, her face alight with devotion. She had made it. She was here, in heaven, worshipping God. Safe forever, and forever grateful because the love of God had saved her from a lost eternity trapped in the hell just beneath her feet.

In my dream, I saw all this, flitting insubstantial among the redeemed, the saints in heaven. And then God’s gaze flicked over to me. His expression darkened, and he opened his mouth to speak.

Then I awoke and dreamed no more.

Other hobbies and fun times |

Sometimes there are foreshocks: a comet, an unexplained eclipse, a new star in the sky.

Sometimes there are not.

This time seemed to be one of the latter and the former, respectively. Fast-moving events, but with a little warning. A nova in the Flame of the Archmage, a new star. A tiny one, visible only with the massive magical brass telescopes of the Santa Cora observatory. Nevertheless, a new star

An uncommon phenomenon, although not exactly rare. As above, so below. Events move, and the stars move with them. The overworld speaks, for those who have an ear to hear. Or an eye to watch. Perhaps this new star would flicker out, perhaps it would endure. Never insignificant, and the placement of this one especially not. Flame of the Archmage, right on the third nodal meridian.

Friar Benson made his usual meticulous notes. Time, place, telescope settings. Murmuring the astronomer’s watchword, or perhaps lament: “if you didn’t write it down, it didn’t happen”.

“What news, good friar?”
“A small nova, lady, white. Brightening from 5 to 4 over the last three days. In the Flame.”
“Another one”, she said. “A new star, but not one of mine. Last Petal of the Grandmaster grows bright, Fifth Forge of The Mountain actually changes colour, Web of Shadows loses a star and The Forest gains one, God of Song begins to realign, sand stirs in The Hourglass. Even the nodes stir and speak. They are all in motion.”
“But where to, lady?”
The Priestess laughed. “Why, here, good friar! They are coming here. But I think they will not stay long. They travel to First Forge.”
Friar Benson was a little lost for a suitable response. “Strange times, lady.”
The Priestess collected herself a little. “It is always strange times. Keep an eye on that new one. Perhaps I should begin taking an interest.”

She moved on. Friar Benson went back to his telescope. It was a fine, clear night. A perfect night to watch the sky.

Riffing on that “watcher of the sky” thing from Deep Magic, the sky being “the overworld” of 13th age, seeing as how James is tossing around holy damage with Nova, and the whole business with being suspended from duty – maybe James’s icon relationship points should move around a little.

A photodiary of a sucessful couple of hours. 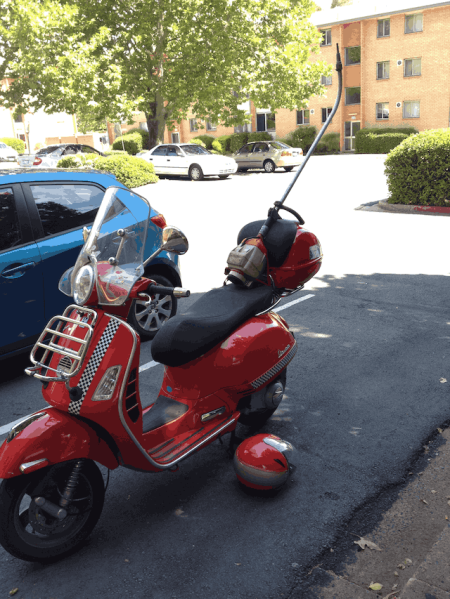 A sucessful trip to Revolve 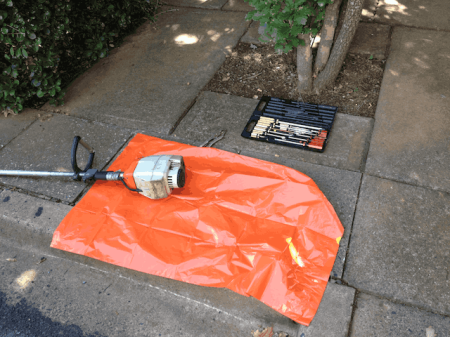 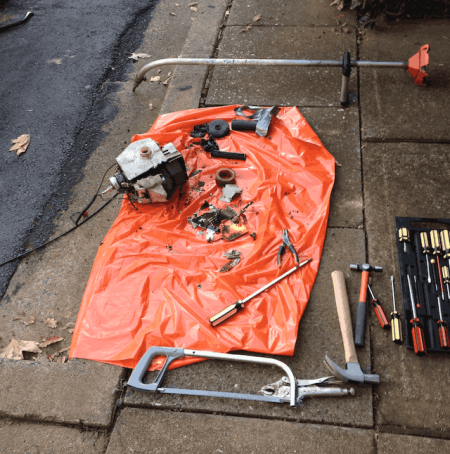 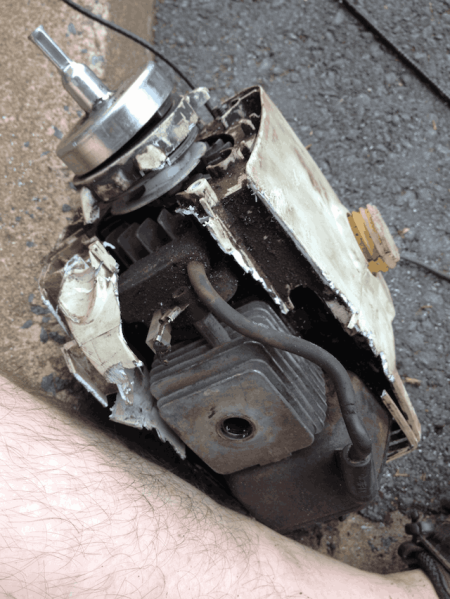 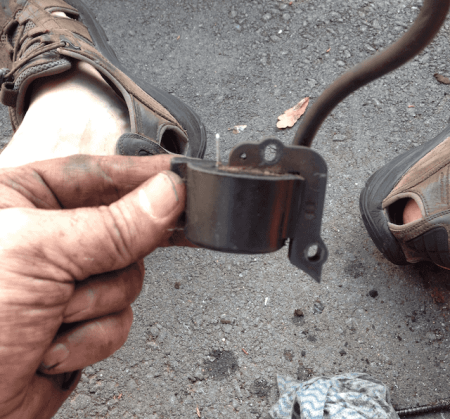 The coil is actually freaky. The whipper-snipper does not have a distributor. Instead, it’s done magnetically (!!). See how the core of the transformer has a circular gap? There’s a lump of metal on the cooling fan on the shaft that closes and breaks the magnetic circuit as it goes past. Freaky.