Like a boss. The code for this is mainly on thingiverse. 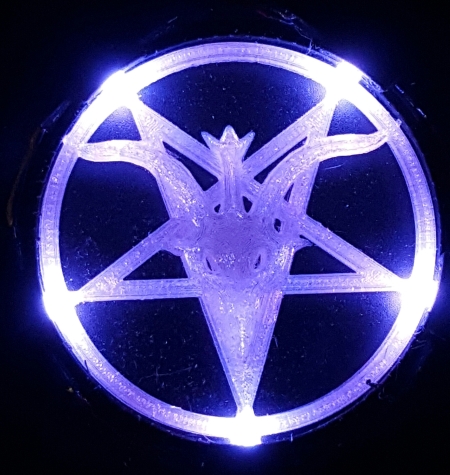 I write to you of a most urgent matter, as it appears that Santa Cora has been blockaded – I am told that there is no way to get a message out of the city. I hope that the way by which I send this message may yet be open.

Edmund of the Council of Four informs us that a massive orc army is some few days away. It seems that our little company for the past few weeks has unknowingly has traveled scant days ahead of it.

To out best information, the orc incursion is based at Proudfort. The army approaching Santa Cora appears to comprise at this point, James puts in the details that he got from Edmund and the commander about the composition of the army – numbers, naval, siege..

Although this information was initially not strongly credited, I was able to confirm to the city commander that Chancer’s Hope was indeed assaulted by a large orc naval fleet and land army, backed by giants. (Reassuring that the names “Mallard” and “Griffinsheart” carry at least some weight). The city now prepares for battle and siege, but I fear that Santa Cora is woefully unsuited to such, having always relied on its magics.

The magics of the city appear to be – well – not working properly, and it’s impossible to be more precise than that at this stage. I fear that the Lich King may be involved in all this, as there have been liches in the city and other phenomena relating to the undead.

It is something of a puzzle to me as to how this very considerable army – if these orcs come from their usual lands to the northwest – was moved to Proudfort. The logistics are challenging. The only feasible route, I suspect, would be along the behemoth path, to the ruins around the Grey Towers, down the coast and through the Koru Straits. This means that Drakenhall must also be involved – Drakenhall controls the straits, and in any case orcs simply don’t have ships as a rule.

Thus the most terrible enemies of the empire – the orcs, the dragons, and the undead – would seem to be in some sort of alliance, one of at least several years standing, which is now moving into open action.

James debated mentioning the very secret fact that the city has a second node, and that it is deactivated, and that activating it would worsen relations with the dwarves and elves. It seems that the nodes used to be more active in the past, and played a role in the old wars.

He is not mentioning it because it’s a military secret, and because it doesn’t directly relate to what the recipients of this letter need to know. If he included it, then grandad Lancet and Ducalis could not show this letter to anyone else, which is something they might need to do.

Irrespective of my speculations about history, obviously major action cannot be taken on my word alone. However, I hope that if indeed no communications are getting into or out of Santa Cora, at least someone has noticed and wondered why that might be the case. The situation is extremely grave.

Oh, mother – in happier news, it appears I am now a Captain.

This is not a letter to anyone in particular. Maybe James just writes things down to organise his thoughts

The Lich King asked me an important question earlier today.

Yes, truly. I rather foolishly decided to attempt to wear a certain ring, judging that better me than someone else. In the end, perhaps I was right. I seem to have emerged mostly unscathed and un-ringed. (How on earth was Cannis simply able to remove it?)

Neverthleless he asked me: why should it matter who in particular is emperor? Is not the empire its people?

The answer struck me immediately as “no”, although I was at something of a loss to defend it. I answered that my loyalty is given to The Emperor, but the Lich-King’s question was a fair one. There have been other Emperors before the man we have now, and there will be others subsequently. If another man were Emperor, I would serve him as willingly and completely as I do this one. So to what, then, is my loyalty given?

Although, obviously, the possibility of having an empress doesn’t cross his mind. Can I just say, at this point, that Her Maj Elizabeth the Second by Grace of God Queen of Australia does a wonderful job, God blessah?

The notion that The Empire is its people belies itself the moment you start to examine the notion. Let us start with the obvious: there is nothing special about we the inhabitants of the empire. The people are simply people, the same as in other times and places, and nothing more. Nothing less, either: people are quite remarkable. But there is nothing inherently different between a work-gang of farmers and a pack of bandits. They eat and drink, they bleed, they have hopes and virtues and vices. It’s possible for a sailor to be punctual, diligent, and obedient and yet crew a pirate ship.

In a word: the substance of empire is its legitimacy. A nebulous idea, to be sure. And so the need for strong symbols – flags and parades, a crown and a man to wear it. To give one’s loyalty to those symbols is not in itself wrong, even if that loyalty might be understood more deeply.

Nevertheless, we are in danger of a solipsism here, that the empire is legitimate because it is legitimate. As the Lich King points out – if he were Emperor, I would serve him. He may be right about that, but it does not follow from that that I should therefore support his efforts to overturn the current Emperor. To put it another way – it may not matter all that much who the emperor is, but it matters a great deal how he came to become the emperor.

If I travelled to another part of the world, with different laws and a different emperor, should I be obliged to follow the laws there?

I say yes. No – I say maybe. Laws can be unjust and oppressive. If the laws in this hypothetical kingdom were worth honouring, then they would be substantially the same as the laws here. They would outlaw murder and theft and sedition, they would oblige the strong to protect the weak, they would make it possible for a common man to pursue a trade and raise a family in security.

Perhaps I have just changed my mind. No – perhaps I have found a way out of the quandry of legitimacy. The emperor and his laws are right because they do right for the people that they are protected by. So it does come back to the people, but not in the manner the Lich King argues.

What a load of nonsense I have written! Necromancy disgusts me – I shall not serve a fleshless head under any circumstances, it’s as simple as that. Likewise, I shall not forswear my oaths – how could I have forgotten? I will oppose the Lich King, all who serve him, and any other enemy of the Dragon Empire to the limit of my power to do so, now and always.