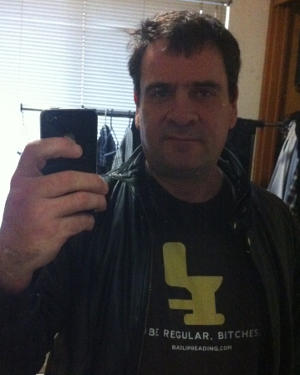 I be regular, bitches.

So I was at The Durham. Chucking out time. Had been making eye contact with a suitably-aged woman. Not bad. I guess she couldn’t help but admire the awesome t-shit I was wearing.

Outside. More eye-contact. Then … contact! Conversation with a total stranger! How novel!

With little preamble, she made a small confession. “I’m 42”, she mentioned casually, in passing. Perhaps a warning? I don’t know. I replied: “I’m 46”.

She was taken aback. Expression of surprise. “Do you use botox?”. I was flattered. “No,” I explained helpfully, “never been married.”

She left. Beats me why.

I want me a woman

I want me a woman, one who is as drunk as I am, right now.

I’d hold her hair for her, and tell her “It’s ok” while she vomited into the toilet. Then I’d kiss her right on the mouth and pretend I couldn’t taste it.

Then we’d go to bed and fall unconscious. About ten we’d wake, and both be thinking the same thing: “I totally need to piss, and also I am incredibly thirsty”. We’d take turns, one of us using the bathroom while the other slurped water straight out of the tap. Then we’d go back to bed and hump, although nothing much would come of it.

(I once has sex with a woman who felt, seeing as we had had sex, that it was totally ok for her to leave the door of the bathroom open while she had a piss. What the fuck? Maybe it’s having kids does that to a person. They lose their sense of propriety when it comes to bodily functions.)

About two we’d wake again. I’d tell her: “babe, I have D&D at six” and one of us would catch a taxi home. Probably me.

Just a little slice of happiness is all I really want.

A short caveat. If you read my blog to read my gaming stuff, you may wish to skip straight to my games category. I mention that because there are a couple of new people who have this address, and they may be puzzled by the following post.

I have written about Mike before. Looking at that link – amazing that it was only Dec 2010. Feels like longer – a lifetime ago. Mike – who I shall refer to as ‘Robyn’ (not her real name! Or her real one, either – I have never identified her and I intend to keep it that way) – and I had a brief exchange Nov 2011. We arranged lunch, but she flaked at the last moment, which is fairly typical. Citing work with the usual asymmetry: I also took time off work to be at our lunch, but my time/convenience/paycheque/etc just doesn’t matter.

About that time I decided that I would not engage in electronic communication with Romnia again. When we speak face to face, it goes well. When when talk over the intertubes or in text, it rapidly deteriorates. Also, I rather dislike being just one of the many people whom someone else is txt juggling. It’s a bit like the time I was approached for sex by a married woman years ago, but pretended not to understand because I knew that she had previously approached my mate. I simply didn’t appreciate being second choice. I fobbed her off with a tube of Vagisil, which is a funny story but not the one I am telling here.

Couple of days ago Rosa pokes me on facebook. She is terribly concerned, she is worried about me. I – well, it’s true – I have been browsing misogynist websites. I have. Romy writes:

I’m frightened, saddened & more than a little disturbed at the distinct misogynistic slant your shared postings have taken. At one time, I believed us to be close friends. …

Fair point. I responded – I thought – in kind. Direct, without bullshit:

I’ll tire of it. For a while I was right “into” Pharyngula and science, and before that the whole christianity and creationism thing. And, of course, for a while I was right into participating on FIA. But they all began to repeat themselves after a bit.
I’ve on a forum at the moment, dealing with all this sort of stuff. I enjoy writing, enjoy trying to come up with something memorable and quotable. But mostly I echo other people’s opinions, and I recognise that. My own life experience simply isn’t that broad. …

IOW: “Relax, Roslyn, it’s just a phase.” A quitely humourous and objective look at where my own head was at.

In reply, I get this:

You’re choosing to make yourself unwanted & unlovable, along with the rest of those fucked up weirdos you’ve been hosting. Who would choose to love someone who clearly despises humanity? I’m even left wondering if you’re not secretly gay…
…& those who can’t do, bitch about it. [;)] No offense, but half of those guys you’re idolizing couldn’t get laid in a brothel. … (etc)

There’s a couple of things to note, here.

Remember Lethal Weapon II? Remember when the dude calls Mel a “Kaffir (nigger) lover”? Here’s the thing: that particular insult only works on people who are racist. To a non-racist, it’s water off a duck’s back. Neither I, not any of my friends, nor anyone I work with, is a homophobe. Or if they are, they’d be rightly ashamed to admit it. If I were gay, it wouldn’t matter. So this is a shot wide of the mark.

(It’s dead simple to work out if you are gay – just imagine you are eating dick, and someone asks you “is there something else you would rather be doing right now”? When I’m eating pussy, and that question arises, my answer is always “No … no. This is where I want to be.”)

And not only a shot wide of the mark, but surprising coming from Rubi. Ruth is really quite articulate and intelligent – certainly a better writer than me. Is “UR HOMO!” really the best she can do? Really? Is this writer of the most wonderful diatribes second only to Helen Razer now being coached by Beavis and Butthead?

(edit) Also what ticks me off is the blanket condemnation of the MRAs, many of whom have sad stories to tell, many of whom have been reamed by The System and by women they loved and whom they thought loved them. Roberta is not the only victim in the world, you know. They are not my homies or anything, but they are a lot like me and I do identify somewhat with them.

The other point is the meta. Here’s that sequence for you again:

Paul, I’m just oozing concern.
It’s a phase. I’ll get over it.
You worship assholes! Ur gay! Those guys burn crosses on the front lawn! They can’t get laid! (etc)

I mean … I just don’t get it. I’m at a loss. I tried apologising to Rylee before, long ago, and was similarly rebuffed. What kind of answer might possibly satisfy her, do you suppose? What shape of words is she looking for? I mean, would tearful repentance be the thing? What?

Maybe she is just bored and wants to play. I dig.

I deconverted from christianity to atheism a long time ago. And one thing you learn as an atheist on the intertubes is that religious folk just repeat the old arguments over and over.

I don’t think I “idolize” anything at this late stage of my life, and as for the gay crack, that would be a “Code Lavender” on the anti-male shaming chart

Actually, the shaming chart quite neatly deals with a few of the points you have raised. The “burning crosses” is code brown, for instance. Why not read though it? No-one wants to be formulaic, and this chart will help you avoid common and overused tropes when discussing the topic.

Now please understand: this was a nut-punch. Like many people who are quite bright, Rebecca is somewhat intellectually vain. An accusation of being “formulaic” is pretty low. More so when you read that chart, because it’s so fucking true. I mean, read the chart, and read the whole of Renata’s mail to me. You can just about go down the list and tick ’em off.

After which I get “You’re a hater, I don’t want you in my life, I pity you, your life must suck.” And a messaging block.

Hence my resorting to this blog to make reply.

So it seems I am a hater. I tend not to think so. If I were, I’d be all “bitches be bitches” all over this. Instead, I just think Richelle is a little confused about what she wants out of me.

Also, my life sucks. That I already knew. But it sucks a little less each year. Not quite at the point where I prefer a really, really big bowel evacuation to sex, but it’s approaching parity.

Finally, I’m unlovable. Girl: I been living alone so long I simply wouldn’t know what to do with a girlfriend. Or lover, if we want to be all adult. It’s just too late for me. Missed that train a long time ago.

Maybe Rita is just upset that a few years back I ceased buying what she’s selling. Metaphorically, of course. I think our falling out actually does date from about then. A suspicious coincidence, anyway.

I do look forward to hearing from her again in another six months.

People and Places, Romance and Sex |